STARRED REVIEW for IN NEW YORK!
Posted on: January 23rd, 2014 by Marc Brown No Comments 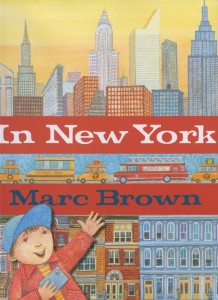 In New York. illus. by Marc Brown. 40p. Knopf. Mar. 2014. Tr $17.99. ISBN 9780375864544. LC 2013020158. ebook available.
PreS-Gr 1–Brown offers a kid-friendly tour of New York City that captures the hustle and bustle of the metropolis. In rich, detailed spreads, readers are taken from the West Village, Brown’s own neighborhood, back in time to New Amsterdam, where “clucks,” “oinks,” and “bahhs,” mirror the ubiquitous “honks” and “beeps” of the next spread’s modern metropolis. A father and son explore the city along with the reader, from the top of the Empire State Building to the lower levels of the subway, through parks, bridges, and museums across Manhattan. Locating the pair on each page is part of the fun. Young readers who have visited the Big Apple or recognize its landmarks will enjoy spotting familiar places and faces (Brown’s famous character Arthur makes an appearance as a float in the Macy’s Thanksgiving Day Parade.) The watercolor and gouache illustrations show the modern face and skyline of New York City, which includes the recently completed Freedom Tower and the High Line, a park built on an old elevated train track. Kids will love poring over the images and will revel in the facts and statistics given, like the fun tidbit that Central Park features 24,000 trees! The simple, conversational text makes this a great read-aloud, even for younger children. One minor issue is that Brown does not incorporate information on the outer boroughs, focusing only on Manhattan. Still, young travelers and travelers-at-heart won’t be able to get enough of this wonderful look at the iconic city.–Marian McLeod, Convent of the Sacred Heart, Greenwich, CT