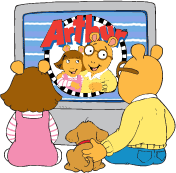 
In 1994 WGBH and PBS approached Marc Brown about the possibility of adapting the Arthur books to a television series. The objective of this new series would be to use the powerful mediums of animation and television to excite kids about reading. To say it worked would be an understatement. Arthur almost instantly became the most watched children's show on television. The series has won 6 Emmy Awards and 25 Emmy nominations. Arthur also received the prestigious George Foster Peabody Award for excellence in broadcasting. Arthur is now the longest running animated children's television series in history.


The shows are produced with WGBH in Boston and Cookie Jar Entertainment in Montreal. These are the geniuses that make the ARTHUR television show so good:


We have had the priviledge of working with many celebrities and cultural icons in the Arthur show:

Jack Prelutsky
As himself on the episode I’m A Poet

Fred Rogers
As himself in a surprise visit to Elwood City

Yo Yo Ma
As Redman’s rival

Joshua Redman
As himself, as Francine’s uncle

Koko Taylor
As herself